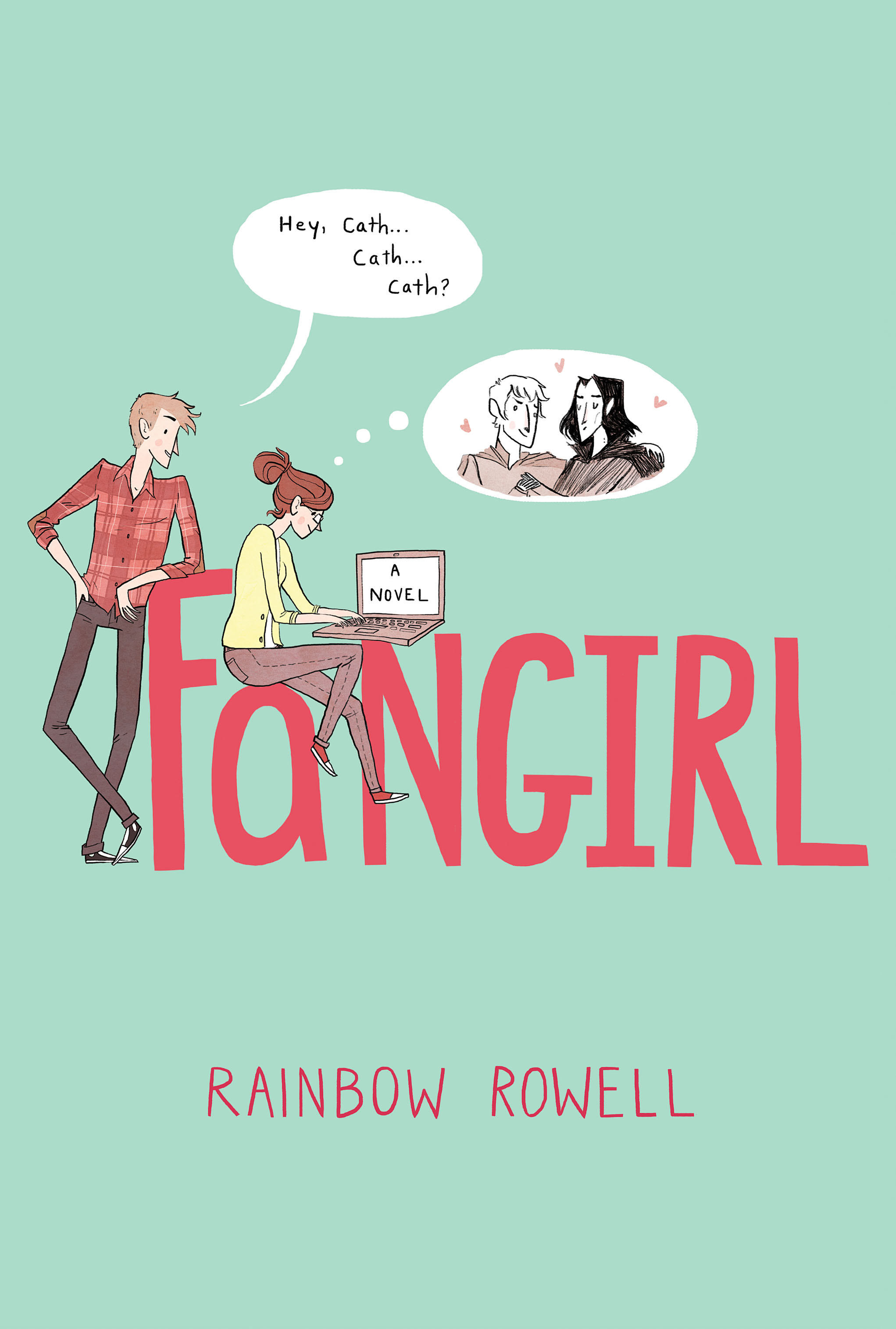 "In Rainbow Rowell's Fangirl, Cath is a Simon Snow fan. Okay, the whole world is a Simon Snow fan, but for Cath, being a fan is her life—and she’s really good at it. She and her twin sister, Wren, ensconced themselves in the Simon Snow series when they were just kids; it’s what got them through their mother leaving.

Reading. Rereading. Hanging out in Simon Snow forums, writing Simon Snow fan fiction, dressing up like the characters for every movie premiere.

Cath’s sister has mostly grown away from fandom, but Cath can’t let go. She doesn’t want to.

Now that they’re going to college, Wren has told Cath she doesn’t want to be roommates. Cath is on her own, completely outside of her comfort zone. She’s got a surly roommate with a charming, always-around boyfriend, a fiction-writing professor who thinks fan fiction is the end of the civilized world, a handsome classmate who only wants to talk about words . . . And she can’t stop worrying about her dad, who’s loving and fragile and has never really been alone.

For Cath, the question is: Can she do this? Can she make it without Wren holding her hand? Is she ready to start living her own life? And does she even want to move on if it means leaving Simon Snow behind?"

Fangirl is a very special book to me and others. I personality have my likes and dislike of this book and it supports why I only gave it 4 stars while other rave and rave and rave about this book.

To start off I am not a huge Rainbow Rowell fan and Eleanor & Park was not one of my favorite books but I figured I give Rainbow Rowell another short and read Fangirl which I liked much better than Eleanor& Park. I want to say all the things I disliked about the books first so I could get them out of the way and plus there's not that much anyway. So the first thing I sort of disliked was the Simon Snow stories in the actual book, I found myself just skipping over the stories because it didn't really keep my interest and I was more intrigued about Cath life then the fan fiction stories or the SI'm on snow book passages.

And in a way this connected to the 2nd thing that didn't really make me happy was Cath, now let me explain. Cath was a really good character but I just couldn't connect with her fangirl personality side, I felt that she was so sheltered in her own world and that her way of being a fangirl was being shut out from everyone around her and only care about the fictional world. Yes I think that plays a part in what a fangirl is but most fangirl want to talk and meet others and most fangirls love to talk about there fandom to others and want to show others there fanfiction works and I felt like Rainbow Rowell didn't really give Cath a 100% fangirl personality but at the same time it's my own opinion and every person fangirls differently.

I also disliked how it ends a little suddenly but the same happen with Eleanor & Park and I just felt a little incomplete after I finish with both Fangirl and Eleanor&Park. I felt like since the book was already long she just had to end it with some ideas the readers can put together about what happens with the characters and her writing.

There was also a lot I liked as well. The most important thing I loved and could relate to on so many levels was the relationship between Cath and Wren and their twin bond. Having a twin myself I really enjoyed reading about Cath and Wren and how they have such a close bond no matter what has happen between them and you could feel their connection to one another so much and it made me smile because I know that feeling of always having that one best friend forever.

Another thing I liked was the love interest, Levi I think his character was so full of life and I absolutely adored his character. I loved the moments Levi and Cath shared and I wanted to yell at Cath to just be comfortable and stop over thinking everything haha but overall the little love story pulled at my heart strings.

I flew by Fangirl in 2 days it was a fun,sentimental, and loving book. Many might relate and connect with Cath and her stories but I just happen to not relate as much which is a let down for me but I still very much liked the book and happy I decided to finally pick it up.